Here are a few IRS FATCA Strategies that I have read via online sources and 20 ways the IRS will find you, shown further below;

Banking clerks & cashiers are now agents for the IRS, if they tell you that your under investigation, they can go to jail.
IRS extended authority to airport personnel with incentives for reporting & seizing US passports if viewed as non compliant, behind, or under reported taxes!
Mobile phone networks & service providers.
When you access the internet & social sites.
Online payment transactions,
Credit card services, Visa & MasterCard etc
Renew your passport or Green Card
Registrations & Licences
All PO Box addresses are assumed American owned!

All U.S. persons, green card holders, all nationalities exceeding 10% business interests in a US company as an owner, shareholder, partner, beneficiary etc, any company doing business with, providing or receiving services with a US company, or a foreign company with a US partner or US entity with more than 10% interest in the business.

Starting July 1, 2014, FATCA will require FFIs to provide annual reports to the Internal Revenue Service (IRS) on the name and address of each U.S. client, as well as the largest account balance in the year and total debits and credits of any account owned by a U.S. person.

If an institution does not comply, the U.S. will impose a 30% withholding tax on all its transactions concerning U.S. securities, including the proceeds of sale of securities.

In addition, FATCA requires any foreign company not listed on a stock exchange or any foreign partnership which has 10% U.S. ownership to report to the IRS the names and tax I.D. number (TIN) of any U.S. owner.

FATCA also requires U.S. citizens and green card holders who have foreign financial assets in excess of $50,000 (higher for those who are bona-fide residents abroad) to complete a new Form 8938 to be filed with the 1040 tax return, starting with fiscal year 2011.

20 ways the IRS will catch you. 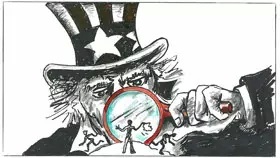 By acts that re-establish US ties

It may seem obvious, but Americans who have lived abroad for many years and not filed tax returns still sometimes do not realise that they will bring the IRS down on them like a ton of old tax records when they:

1. Register the birth of their child at a US embassy in the country where they now live, or

2. Renew a long-dormant US passport.

3. Appearing at a US airport with a non-US passport that reveals the bearer was born in the US is almost certain to set alarm bells clanging back at IRS headquarters in Washington. This is because even though they may have been full citizens of other countries for decades, Americans are not allowed to enter the US on anything but an American passport – as American-born London mayor Boris Johnson discovered (to his fury) in 2006. (Those who try, as the then-Spectator columnist discovered, will be barred by sharp-eyed border staff, who spot the place of birth in their foreign passports.)

4. When the children of Americans who left the tax system years before apply to attend US universities, their university application forms can reveal the existence and residence details of the parents that, until this point, had not been known.

5. An American who is unknown to the IRS and who notifies the US authorities of his or her presence overseas in order to begin receiving Social Security payments, and/or any other US pension entitlements, is likely to receive some considerable official interest, alongside the new monthly cheques.

6. Merely paying money into the US domestic banking system can, in some situations, call attention to a “lost” American’s existence by reactivating dormant records.

By getting married, divorcing or dying

The IRS takes an active interest in the key life events of American citizens, for the simple reason that such events can shine a spotlight on individuals who may have disappeared from its radar years before.

7. If a US parent or relative of a non-US-resident individual dies, and leaves that non-US resident money, the IRS will immediately want to see that this “income” is declared by the recipient.

8. and 9. Marriage and divorce are other rites of passage that can reveal “lost” Americans to the US authorities.

10. The action of having someone granted power of attorney on behalf of an incapacitated non-US living individual who at one time held an American passport, meanwhile, can be a giveaway.

By showing up in gov’t, tax authority exchanges

11. As a result of data exchanged between the US and other governments under long-standing, existing treaties.

However, since the 2001 attacks on the US, Washington has been ramping up the amount of information it expects to receive from other countries on all people, not just Americans. The Foreign Account Tax Compliance Act is just the latest in a series of such measures.

Thus, the presence of Americans may now also be revealed to the IRS:

12. By the IRS’s foreign counterpart bodies, such as HM Revenue & Customs.

13. As a result of information supplied to it, under FATCA, from foreign banks and financial institutions.

14. As a result of information provided to it by the Serious Organised Crimes Office (SOCA), after a UK professional adviser alerted SOCA to his or her suspicions that a client might have unpaid US tax liabilities.

15. From data held by the US Treasury’s Financial Crimes Enforcement Network.

16. From data already held by the IRS, for example, provided to them through the Offshore Voluntary Disclosure Program, perhaps by other taxpayers.

17. From data stolen from banks and financial institutions and acquired by governments (as has happened a couple of times in recent years in Europe).

18. From information provided to the IRS in return for payment of a reward (the largest reported reward paid out so far having been $104m).

By participating in online activities

It is a well-known fact that the Internet is a wealth of information about people, whether they like it or not. So it is hardly surprising that the IRS may discover someone who does not live in the US is an American from the trail of information they leave online.

For example, it may obtain the fact of a “lost” American’s birth…

19. From information gathered from eBay, Google, Apple, Visa or MasterCard or another US institution that has servers located in the United States, and which hold data on US persons who live overseas.

20. From any other information in the public domain, such as LinkedIn entries listing individuals living outside the United States who the IRS records show is not filing US tax returns.

Original source link: 20 ways the IRS will catch you