Remember, nuclear energy is safe, like GMOs, like the NSA/Homeland Security Police State, like whatever government, corporate interests and presstitute media tell you.
Just keep believing.

Even the soothsayers and Abenomics spin doctors expected a downdraft after Japan’s consumption tax was jacked up to 8% from 5%, effective April 1st. But not this.

The tax hike had been pushed through parliament by Prime Minister Shinzo Abe’s predecessor. It was supposed to save Japan. But no one wants to pay for government spending.

Japan is in terrible fiscal trouble. Half of every yen the government spends is borrowed, now printed by the Bank of Japan. Expenditures can’t be cut, apparently, and government handouts to Japan Inc. had to be increased. Yet something had to be done to keep the gargantuan deficit from blowing up the machinery altogether, and it was done to those who spend money.

But here is the thing: money that people and companies keep in the bank earns nearly nothing, and even a crappy 10-year Japanese Government Bond yields less than 0.6% per year.

But if buyers frontloaded major purchases by a few months or even a year to beat the consumption-tax increase – buying that refrigerator or heavy-duty truck a year earlier than they normally would, for example – they’d save 3% of the purchase amount. That’s pure income. And tax-free for individuals. The biggest no-brainer in Japanese financial history.

Every company and individual frontloaded whatever was sufficiently practical and substantive, and whatever they could afford. It started late last year and culminated in the January-March quarter. As a result, GDP soared at an annual rate of 5.9%, a phenomenal accomplishment for Japan.

The Japanese have been through this before. Ahead of the prior consumption-tax hike from 3% to 5% effective April 1, 1997, consumers and businesses went on a buying binge of big-ticket items. The economy boomed for a couple of quarters, then woke up with a terrific hangover as spending on durables by businesses and consumers ground to a halt, and the economy skittered into a nasty recession that lasted a year and a half!

The Ministry of Economics, Trade, and Industry just released a dose of reality. Total retail sales in April plunged 19.8% from March and were down 4.4% year over year. But this includes sales of perishable and small items not suited for frontloading, and convenience-store sales (which rose a smidgen). In stores where people buy durable goods, such as appliances, watches, or cars, sales were awful.

At “large retailers,” sales swooned 25.0% from March and 5.4% year over year. At supermarkets, where people also buy some durable goods, sales fell 3.9% year over year – people even stocked up on non-perishable food and beverages. At department stores, where people buy jewelry, designer clothing, or French purses, sales fell 10.6% year over year. It wasn’t just retail. Sales between businesses – nearly 2.5 times the value of retail sales – plunged 20.4% from March and 3.7% year over year. In short, it was the largest decline in sales since March 2011, when the Great East Japan Earthquake and tsunami that killed over 19,000 people, brought commerce to a near-standstill.

Those sales were in prices that had been inflated by 3%. That tax-hike money doesn’t stay with the seller but is turned over to the government. In actual merchandise sales, the scenario is 3 percentage points worse. So sales at, for example, large retailers on a comparable basis dropped 28%, not 25%.

At the end of January, the Japan Automobile Manufacturers Association (JAMA) forecast that passenger and commercial vehicle sales would dive 9.8% in fiscal 2014, to 4.85 million units, the lowest since earthquake year 2011. JAMA’s prediction was pooh-poohed as catastrophist.

Turns out, the good people at JAMA are optimists; vehicle sales got demolished in April. As measured by registrations, all categories plunged: new cars, including minis (cars with tiny 500cc engines) -56.0% from March; trucks of all sizes, including minis -54.0%; and total vehicles sales, retail and commercial, cars, trucks, and buses -55.9%, from 783,384 units in March to 345,226 units in April.
It was the worst performance since December 2012 (December being historically the weakest month of the year in Japan) when the economy was still suffering from the aftershocks of the earthquake nine months earlier.
Here is the chart of that epic collapse in total vehicle sales:

Most of the vehicles sold in Japan are made in Japan – despite decades of screaming by US automakers, which have yet to get their foot in the door. This means production schedules are going to get cut, hours will be reduced, component purchases will be whittled down…. It has already happened.

In April, production was cut by 18% to 770k units, including export units, which are doing well. And the whole chain reaction of a large complex manufacturing sector slowing down will worm its way into the statistics over the coming months. Same as in 1997.

The slowdown will add to the slowdown already underway in business and consumer spending on durable goods. And all the hype about the phenomenal January-March quarter and how Abenomics was performing miracles, and how consumers were finally starting to spend is already turning into furious spin-doctoring as economists are fanning out to explain that this time, it’ll be different, that April was just a blip, that all this frontloading won’t lead to a long recession, as it did last time.

And on May 30, the hapless Japanese consumers woke up to find out officially what they’d already figured out on their own: inflation in April had soared 3.4% for all items from a year earlier, with goods prices up a dizzying 5.2%. But their incomes have been stagnating.

The wrath of Abenomics is slamming them: inflation without compensation. Inflation mongers will be ecstatic, but this can’t possibly be good for the Japanese people, or the economy.

Have you reviewed your financial strategy lately?
If you have not contacted me yet for an independent financial consultation, what’s taking you so long?

On Monday, the newest 10-year Japanese government bond — the yield on which is used as a benchmark for bank loans and a barometer of trust in government finances — didn’t trade even once.

Traders say it is another sign of how the Bank of Japan’s massive bond buying program has silenced the market.

If the 10-year JGB goes a full 24 hours without being traded, it will be the first time since Dec. 26, 2000, according to the Japan Bond Trading Co., which publishes rates.
That seems likely, since most investors close their books at 3 p.m. Tokyo time. 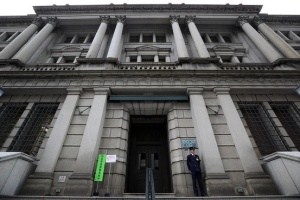 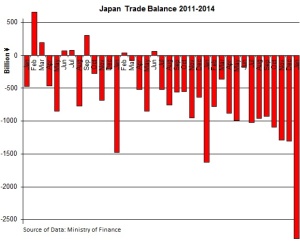 There are two areas where Abenomics, the democratically elected economic religion of Japan, has succeeded: creating inflation without causing wages to rise, thus whittling down real incomes; and devaluing the yen by 25%, thus wiping out a quarter of the magnificent wealth of the Japanese without telling them directly. Grudging admiration is due Prime Minister Shinzo Abe for these accomplishments.

Link to: The madness of Abenomics in one crazy chart

“it is my opinion that long term there is a significant likelihood Japan will experience a sovereign debt crisis. As a result it is my belief there is an opportunity to trade and be net short the Japanese government bond market.”     Tres Knippa

Link: Why This Harvard Economist Is Pulling All His Money From Bank Of America ?

What about in Europe ?
FT Link: Bundesbank proposes taking money from bank accounts as a contribution towards paying Euro Zone debt!

The IMF said the tax rates needed to bring down public debt in eurozone countries to pre-crisis levels would be hefty; it reckoned a rate of about 10 per cent on households with positive net wealth.

Last year, Cypriot deposit holders were forced to take losses on their bank accounts to help pay for the country’s €10bn international bailout. But those deposits were used to limit the price tag for its rescue as opposed to paying down the country’s sovereign debt load.

How about Japan ?
Link: Japan plans to use funds from dormant bank accounts

Japan Balance of Trade is reported by the Ministry of Finance Japan. From 1970 to 2010 Japan had been recording consistent annual trade surpluses, however, since 2011, Japan has been posting trade deficits as costs of imports have surged due to the weakening Yen. Now the most recent report shows Japan trade deficit widens to record as yen inflates imports, Japan’s trade deficit swelled to a record 1.63 trillion yen ($17.4 billion) on energy imports and a weaker yen, highlighting one cost of Prime Minister Shinzo Abe’s policies that are driving down the currency. Please review this article for further observations;

March 15th – Overseas assets combined exceeding a value of JPY50M is to be reported for tax, or face improsonment upto 1 year!

April 1st – NEW RULE, Inheritance tax now to include overseas assets if either the ancestor or the heir resides in Japan on the day of death.

In progress – Public policy to continue to raise the cost of living expenses by debasing the currency targeting 2% inflation & reducing domestic purchasing power.

Consumption tax raise misdirected
Households are also facing higher costs for medical and nursing care services, higher pension premiums and a reduction in pension benefits. The Abe administration has already slashed core benefits for welfare recipients.
The government plans to exclude elderly people who need less care from services under the nursing care insurance system and force them to use municipal services. It is also going to increase out-of-pocket payments by people aged 70 to 74 for medical services from the current 10% to 20% of the cost, and raise pension premiums for corporate workers, the self-employed and the unemployed.

Happy Xmas and a merry new Tax year..!
from your government.

Hedge Inflation with Gold and Protect Your Purchasing Power